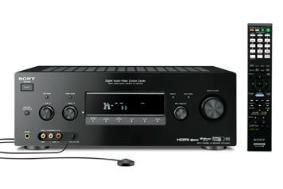 We've just received details of Sony's new home cinema receiver line-up for 2008. There are three models in the range – the STR-DG820, STR-DG720 and STR-DG520 – although we won't be getting the STR-DG720 model in the UK, just the other two.

The most surprising thing is the price of the two UK models: the HD-audio-capable STR-DG820 will cost just £299.99, while the entry-level STR-DG520 will retail for £179.99. That means Sony's STR-DG820 will offer high-definition audio decoding for £100 less than the price of Onkyo's £400 TX-SR606, although the latter does have 7.1-channel analogue inputs, 1080i upscaling and biamping.

The STR-DG820 has high-definition audio decoding for Dolby TrueHD, DTS Master Audio and linear PCM, as well as supporting all the legacy Dolby and DTS surround sound formats.

It also has four HDMI 1.3 inputs and one output, with support for 1080p, 24fps, Deep Colour/x.v.colour, and complete system control via the Bravia Sync HDMI connection.

Power is 7 x 100w and there's digital auto-calibration for easy set-up. You also get a Digital media port for connecting portable music devices, and a special 'portable audio enhancer' mode designed to improve the sound quality of compressed music files.

The digital media port can accept a range of adapters for hooking up Sony Walkman players, Sony Ericcson mobile phones and Apple iPods. There are also adapters for Bluetooth and wi-fi connectivity.

Lower down the range, the STR-DG720 has a three-in/one-out HDMI repeater with support for 1080p/24fps video and x.v. colour, and can accept high-definition multichannel audio as eight-channel linear PCM. But it will only be available in the rest of Europe, not the UK.

Again, like the STR-DG-820, it delivers 7 x 100w, comes with auto calibration and Bravia Sync operation. It can decode Dolby Digital EX and DTS-ES soundtracks.