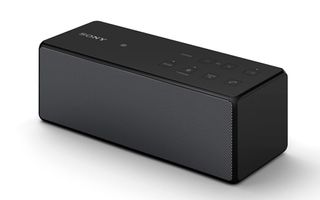 Sony has unveiled two portable wireless speakers, the SRS-X2 and SRS-X3. Summer may not be here yet, but the company is already thinking what you can take on holiday.

First up is the SRS-X3. It has Sony's ‘Distinctive Outline’ design, which consists of rounded edges on a rectangular shape. This is supposed to improve sound quality by reducing diffraction.

It has two 34mm drivers, each with a maximum power of 10W, and two passive radiators. ClearAudio+ digital processing promises to improve the sound of poorer recordings, while a ‘Sound Mode’ offers a wider sound stage.

The built-in battery lasts up to seven hours of play time before you have to recharge via microUSB. Connections include Bluetooth and 3.5mm as well as NFC for easy pairing. There’s also a speakerphone for phone calls.

It weighs 850g and you can carry it around in a foldable case.

The next one is the SRS-X2. It’s the X3’s little brother. It also has Bluetooth, NFC and ClearAudio+ processing. The battery life is estimated at five hours of play time.

The passive radiators have been replaced by a single reflex port, but the drivers are 45mm in diameter. It is a little smaller and lighter, weighing in at 500g.

Meanwhile, check out the rest of the SRS-X range, which also includes the brilliant SRS-X9, as well as the X7 and X5.