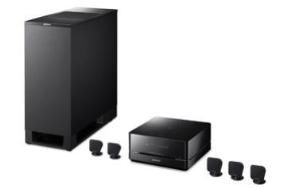 One adds wireless rear speakers to the winning formula, another includes a 160GB HDD/DVD recorder, and completing the range is an amplifier/speakers system designed as an add-on for Blu-ray Disc or DVD players.

The DAV-IS50 (illustrated) is similar to the DAV-IS10, but with the addition of wireless rear speakers. It has a slot-loading DVD/CD player in its control unit, which also includes an FM RDS/AM radio tuner and surround sound processing.

The power is delivered from multichannel amplification built into the subwoofer unit, and the five main speakers are the familiar golfball-sized units used in the DAV-IS10.

The HT-IS100 moves all the processing into the subwoofer, and comes without a player: instead it has three optical and one coaxial electrical digital input, plus three HDMI inputs and one output, and can accept Linear PCM multichannel sound from a Blu-ray Disc player.

Bravia Sync, DCAC and the Digital Media Port are also provided, and the system can also be used with an optional S-AIR wireless adapter for the rear speakers.

The final system, the HTD-890IS, has a 160GB HDD/DVD recorder with analogue and digital tuners, the same inputs and outputs as the HT-IS100 plus video upconversion to 1080p, and Bravia Sync, DCAC and the DMPort. It's also S-AIR-ready.

No pricing has yet been announced for the new systems, which are in the shops soon.