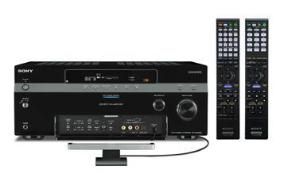 The flagship STR-DA6400ES is DLNA-network enabled to enable users to stream digital content from a PC or media server to the receiver.

All the high-definition audio formats are covered, with onboard decoding of Dolby Digital Plus, Dolby True HD, DTS HD Master Audio and DTS High Resolution.

Other features of the 'DA-6400ES include six HDMI inputs, with one on the front, plus two HDMI outputs, all capable of supporting 1080p/24fps video, xv colour and Deep Colour from Blu-ray discs.

All audio signals, including internet radio, can be distributed to up to three rooms simultaneously, while video can be sent to a second zone and controlled via a second GUI (graphical user interface).

Sony's Digital Cinema Auto Calibration system uses a microphone to tune the receiver to your speakers, room and listening position.

STR-DH models replace STR-DG series
In Europe, there are also three new models in the budget STR-DH series, replacing the existing STR-DG models, but the UK will only get one, the STR-DH800.

You get four HDMI outputs and one HDMI input and the ability to biamplify your speakers.

In the middle of the range (and not coming to the UK), the STR-DH700, also a 7.1 design, has three HDMI inputs and one output, and also supports wireless rear speaker operation.

And the entry-level model is the 5.1 STR-DH500 with Digital Cinema Auto Calibration and a Digital Media Port for connecting a variety of portable music players.

The Sony STR-DA6400ES will be available in the UK from July, the STR-DH800 from May