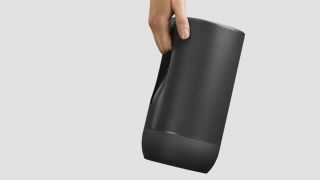 Now that it's nearly six months' old, Sonos' first portable speaker has been treated to a tasty discount across several UK retailers.

The Sonos Move launched at £399 but can now be found for £349 on the likes of Amazon, John Lewis, Richer Sounds, Sevenoaks and Currys – as you can see below.

A Sonos Move and a Sonos Beam deal all in one week? The Gods are clearly looking down on us.

So should you buy it? If you want Sonos sound and features on the go, then yes. The Move is, we concluded, the company's "most versatile speaker yet" and "really does do it all – but it doesn't come cheap". Well, now it is cheaper.

The Sonos Move is as much a Sonos wi-fi speaker as those before it – you get network music streaming, multi-room and voice assistant – but it also goes where no Sonos speaker has gone before by boasting a built-in battery and Bluetooth.

For the Sonos fan who’s been longing for a do-it-all speaker that’s as at home in a garden as it is in a bedroom, the Move is pretty much ideal.