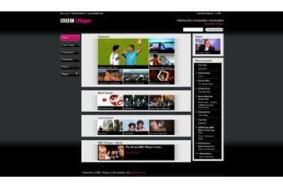 According to the BBC, over 100 million programme requests were received in the first six months since launch alone. The platform is widely credited with changing the viewing habits of many, not to mention boosting ratings for niche and cult shows. Users can either stream BBC shows from the last seven days to watch or listen to immediately, or store them to watch within 30 days.

However, not everyone has been happy with the revolution. ISPs have demanded that the BBC contribute towards the improvements to their networks necessary to support the increased numbers of people making greated demands on their bandwidth, as they stream audio and video to their home computers.

Improvements to the iPlayer include improved navigation, the ability to fast forward and rewind radio shows in the same way as television broadcasts, a 'Last Played' feature which allows viewers to resume a recording at the point at which they last stopped and a larger playback screen. It's thought that further improvements will be rolled out over the coming months.

Already available to Virgin Media customers via their televisions, negotiations are underway to make it available from other internet TV operators.

The old version of iPlayer won't immediately be phased out, with the two versions running alongside each other until the beginning of July.