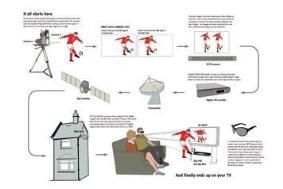 In a private demonstration on Tuesday, whathifi.com was shown the system in action. Sky says 3D TV could be delivered into UK homes via its Sky+ HD box without much difficulty.

Such broadcasts would require special 3D televisions, not yet available in the UK, and viewers would have to wear special 3D glasses. These 3D TVs would be able to show conventional 2D programmes as well.

A number of manufacturers are expected to show prototype 3D TVs at the Consumer Electronics Show in Las Vegas in January.

Sky has been filming a number of events with 3D cameras in recent months. And earlier this year, the BBC broadcast a Six Nations rugby union international in 3D HDTV to an audience in a London theatre, as we reported here.

At the demonstration we saw on Tuesday at the company's west London HQ, Sky showed us clips from programmes it had filmed in 3D, including a Ricky Hatton boxing match and an episode of Gladiators.

"We have shown it is a technical reality," says Sky's director of strategic product development, Gerry O'Sullivan. "Now we have to find a way to bring it to viewers."