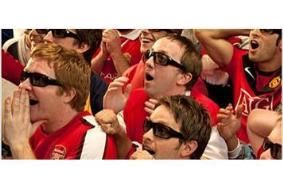 Last weekend Sky 3D, Europe's first dedicated 3D channel, launched in 1000 pubs around the UK and Ireland with the clash between Manchester United and Chelsea.

Brian Lenz, Sky's director of product design and TV product development, says: "Last Saturday more than 100,000 people witnessed the groundbreaking launch of Sky 3D. Many thousands more will experience 3D in pubs over the months ahead, as we build towards our launch to Sky+HD homes."

Customers can find participating pubs through the Sky Pub Finder.