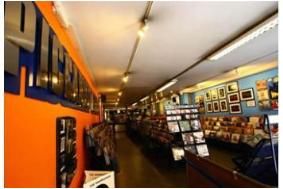 One thousand independent record shops across 18 countries and four continents are participating in the celebration of crate-digging, and there are over 1000 exclusive items set to go on sale.

Sony is supporting the day be releasing its share of those exclusives, with a series of ten limited edition vinyl records featuring the likes of Jimi Hendrix, The Stone Roses, Bruce Springsteen, MGMT and Editors.

Each release is exclusive to the record shops taking part in the event and you can see a full list of those shops in the UK and find your nearest one at the Record Store Day website.

Additionally, two exclusive posters have been produced for the Iron Man 2 AC/DC and Scouting For Girls albums, which will again only be available in participating stores.

Mike Smith, Managing Director of Columbia Records, said: “I am delighted that Columbia Records is able to support Record Store Day with a great selection of bespoke releases.

Independent record stores are the midwives for great music in this country and have been crucial to the launch of so many successful artists' careers. As an industry we need to do all we can to ensure they thrive”.

Record Store Day began life in the US in 2007 and has spread worldwide as an annual celebration of independent record shops.