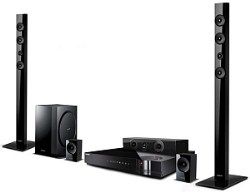 The system combines valve amp technology - two glowing valves are visible in the main unit itself - with digital amplification, which Samsung says - predictably enough - combines the best of both technologies.

Featuring built-in WiFi its due out around May, pricing is as yet unconfirmed. First mentioned at CES, the system was on show at Samsung's European Forum.

Also on display was a soundbar system, the HW-E551, which offers a clever split-speaker design, allowing you to either place the soundbar below your set or separate the speaker in to two and place them either side of your TV.

There's a wireless subwoofer, support for Bluetooth streaming and two HDMI inputs and an output.

More news on release dates and pricing as we get it.