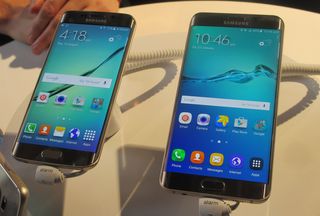 While the Galaxy Note 5 seems the more interesting handset - the S6 Edge+ being a slightly updated version of the existing Edge 6 - it hasn't been given a UK release date as yet. Though we'd assume that will only be a matter of time.

The S6 Edge+ is on the way to UK shores however, offering a larger 5.7in screen. The phone goes on sale 4th September, with preorders starting 18th August.

The most obvious difference to the Galaxy Note 5 over its Note 4 predecessor is in the build. The old phone had a metal frame and plastic, faux leather rear cover. The new phone keeps the metal frame, but instead opts for glass front, with a curved glass back, which is a slight design tweak compared to the Note 4. We felt the glass build gave the S6 phones a more premium feel and deserved their price tag.

Under the hood there's been a few changes too. The screen has been kept largely the same, with a 5.7in Quad HD Super AMOLED display (the pixel density has marginally increased from 515ppi to 518).

The processor however has been upgraded, the Note 5 comes with an octa-core processor (2.1GHz quad and 1.5GHz quad) with 4GB of RAM as opposed to 3GB on the previous model.

Elsewhere internal storage now comes in two options, 32 or 64GB. There's no 128GB option that was previously predicted, something found on the S6 and S6 Edge.

Cameras are relatively similar too, with Samsung sticking with a 16MP sensor with optical image stabilisation on the rear, but introducing a new 5MP front-facing camera.

The S Pen has had a slight redesign, with Samsung claiming it now fits better in your hand, while you can now write on the Note 5's screen even when it's off.

The battery size has been bumped down from 3220mAh to 3000mAh, but the Note 5 features Quick Charge technology via wired and wireless methods. The Note 5 also supports high-resolution audio, Bluetooth 4.2, NFC and 4G LTE.

The Galaxy S6 Edge+ has the same specifications as the Note 5, but also features a screen with curved edges on both sides. The larger 5.7in screen means the ppi count is less than the regular S6 Edge (518 vs 577), but it's still a Quad HD Super AMOLED display, so should still produce a decent image.

The fact the S6 Edge+ has a larger battery than before should help power the larger screen for a similar amount of time. We managed 10 hours of life with the S6 Edge, so we'd expect roughly the same with the larger model.

The Galaxy S6 Edge+ will be available in 32G or 64GB models and in a range of colours including gold platinum and black sapphire.