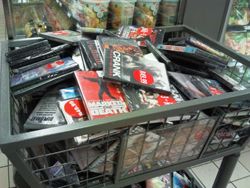 Blu-ray is no longer a selling-point. That was the straightforward analysis of Samsung’s AV product manager at the company’s 2012 European product launch earlier this year. “The fact that a Blu-ray player plays discs is now a secondary feature,” he said. It's the most obvious admission yet from the industry that the future of DVD and Blu-ray – and the software disc in general – is now in serious doubt.

As sales of discs plummet, it’s all too easy to see DVD and Blu-ray being replaced by downloading and streaming alternatives, as recently released figures suggest. At the end of 2009, hi-fi stalwart Linn announced it would stop making CD players. It seems only a matter of time before more of the big names in AV officially follow suit. What then for the disc?

In 2011, Blu-ray and DVD sales fell by 7.2 per cent, while downloads and digital rentals increased by 12 per cent. It’s estimated that the top 10 DVDs in 2007 cumulatively sold 105m copies – in 2011 it was 42m. The shift in consumer spending and habits is already taking place and having a knock-on effect for retailers, manufacturers, the film industry and more.

Music and video (read ‘CDs and DVDs’) retailer Zavvi ceased trading in 2009, while HMV has seen its share price crushed from a peak of 149p/share in 2009 to around 4p/share in 2012. Like-for-like sales for that venerable retailer fell by 13.6 per cent last year, with more than 60 per cent of entertainment sales now taking place online. Universal Studios, meanwhile, reported a 24 per cent fall in revenue in Q1 of 2011.

By contrast, US streaming service Netflix, which launched in the UK earlier this year and is set to appear on more and more devices over the coming months, saw its share price increase by 219 per cent to $175/share in 2010, and hit a peak of $299 by the end of 2011. It’s perhaps no wonder, then, that sales of DVD and Blu-ray players have suffered a decline – even if the Competition Commission recently took an interest in the video-on-demand market.

At the peak of the DVD’s popularity, in 2007, 7.3 million players and recorders were sold in the UK. By 2014, analysts predict that market will have roughly halved in number, and dropped further in value. So, as a new category of streamers replaces CD players, could it be that a new category of network video players or smart TV boxes will do the same in your home system?

Samsung’s focus for 2012 was the company’s Smart Hub of streamed content, with its Blu-ray players cutting a more compact profile and being sold as ‘Smart TV boxes’. Other brands have already taken this a step further, removing the disc drive altogether.

Smart TV boxes connect you to streaming video services such as Netflix, Lovefilm or Sony’s Video Unlimited, giving you your on-demand TV and movie fix in subscription or rental form – without a disc in sight. Philips’ new HMP2000 is set to retail for just £50, and will come loaded with access to Netflix, YouTube and catch-up TV services, while the likes of Apple, Boxee and Sony already have similar devices.

Old-style physical discs face competition on all fronts: Sky is expanding its Anytime+ on-demand content, while Virgin Media announced its first annual profit, as a result of its success in doubling the number of TiVo subscribers, its rival service to Sky+.

There are glimmers of hope for discs. Almost 18 per cent more Blu-ray players were sold in 2011 compared with 2010.

But the good news is tempered: they were an average price 5.8 per cent lower than the previous year, with supermarkets the big winner. While 15.3m Blu-ray discs were sold in 2011, this only represents 13 per cent of an overall declining market.

But, the switch to streaming won’t be plain sailing. Korean broadband companies have already threatened to throttle broadband delivery as a result of smart TV streaming. They have the best broadband provision in the world, yet they’re screaming that they don’t have the infrastucture to cope with the bandwidth demands caused by the prevalence of Smart TVs.

Consider that the UK is only now getting the necessary broadband speeds required for streaming content, and you will see that we might all be looking at a big problem in content provision just over the horizon.

Which is why we argue, in a companion blog, that we argue that we may end up with an internet that can’t satisfy our hunger for content.

Rise of streaming – in numbers

2 million – LoveFilm subscribers in the UK

Read: Can the web take our hunger for streaming?