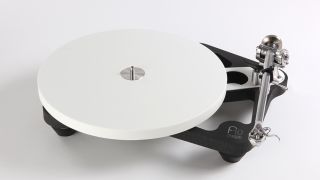 Like the recently launched Planar 8 (which we said “pushes the boundaries of turntable performance”), the Planar 10 takes inspiration from Rega’s very limited edition, £29,999 Naiad. It looks to narrow the gap between the brand’s production models and the Naiad even further than the Planar 8 does, though, boasting a smattering of advanced components over its sibling.

For one, there’s a new RB3000 tonearm, which is fitted with an improved, low mass, precision bias housing and uses Rega’s preloaded zero tolerance bearing assembly adjusted to less than 1000th of a mm. For the first time in a Rega production turntable, a ceramic top brace between the tonearm and central bearing has been used to further strengthen rigidity and improve accuracy.

While the recommended cartridge fitted with the Planar 8 is the Apheta 2, the P10’s factory fitted option is the next model up. The Apheta 3 moving coil cartridge was developed alongside the turntable using Rega’s most advanced "Fine Line" diamond profile, and is sold separately for £1250 or packaged at a discount with the Planar 10 for £4499 (without it, the deck is £3599).

Like the Planar 8, the P10 uses a sandwich construction for the plinth – a Tancast 8 polyurethane foam core between two layers of high pressure laminate – making it 30 per cent lighter than the original RP10. The coupling of the ceramic, flywheel effect platter to the sub platter has been improved, too.

In the name of better stability and accuracy, the P10’s new motor mounting technique has been directly borrowed from the Naiad. The 24v motor is mounted from the bottom and is designed to remove all stress from the motor body whilst holding the drive pulley still. Each motor is supposedly hand tuned to match its own P10 electronic power supply, which Rega says is its most advanced, housed in a metal case that aesthetically matches the design of the company’s hi-fi components.