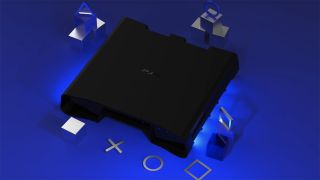 An image has emerged of what appears to be a development kit version of the upcoming PlayStation 5 games console.

The leaked image, which bears more than a striking resemblance to the PS5 patent sketches that appeared in August, looks far from a consumer-ready device but reveals a few potential features, including an optical drive which would support 4K Blu-ray discs.

Previous developer consoles have differed aesthetically quite considerably, as the site that first published the leak, ZoneofTech, points out. So, despite the less than svelte appearance of the unit in the picture below, it's not beyond the realms of possibility that the image is genuine.

One nice spot is the four rubber feet on what was presumed to be the top. Flip it over and we might have something a bit more attractive as per the mock up image at the top of the page.

There’s no metadata attached to the file to indicate much, but the file name itself is a date stamp indicating that the picture was taken on 10th October 2019. This, of course, could easily have been renamed, though.

The leaked picture shows quite the array of buttons, ports and lights. There are what looks like five USB ports, including three USB 3.0s; seven lights that may or may not indicate computing cores; and hard buttons for on/off, reset and eject.

If, indeed, the picture is genuine, it would be a surprise if much of this made it to the final version, though. The picture above shows the PS4 and PS4 Pro next to the carbuncles of their developer editions.

Expect more leaks from here on in as early versions of the PlayStation 5 console begin making their way to video games industry professionals, ahead of the expected November/December 2020 PS5 launch.