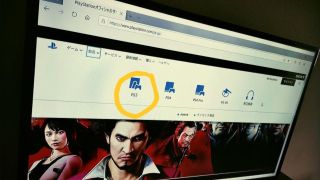 Look closely at the screenshot above and you'll get an idea of what the real, release version of the PlayStation 5 console might actually look like.

This image was a hurriedly taken snap of what is apparently the PlayStation Japan website, as posted by reddit user GamingSince95_Ver2. It all looks pretty normal apart from the obviously hand-drawn yellow circle around an alleged icon labelled 'PS5'.

The interesting thing about this icon, of course, is that it's shaped just like that leaked image of what was thought to be the PS5 developer kit - something a bit like one of those old Tomy Handhelds from the 1980s. The fact that Sony has bothered to make a consumer website icon of the PS5 could indicate that the flying V PS5 console could, in fact, be the final design.

Naturally, it's not the most convincing piece of evidence. The picture could easily have been doctored or the on-screen image could have been faked. What's more, no one else saw the same thing despite the Sony PlayStation Japan website presumably pulling in a fair amount of traffic at any one moment.

Nonetheless, rumours are rumours and, so long as you've got your proverbial pinch of salt, then they all add up to an interesting pre-launch PS5 picture.