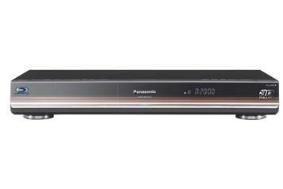 The DMP-BDT300 is Full HD 3D capable and is equipped with a UniPhier LSI chip for processing Full HD 3D movies on Blu-ray. The player outputs images in 1920x1080 resolution in the so-called frame-sequential method, in which the images for the left and right eye are displayed alternately to create 3D images.

Additional features include Viera Cast networking functionality, with content from new partners promised this year, plus DLNA capability and a Wireless LAN adapter. Twin HDMI and 7.1 analogue outputs are included as standard.

And Panasonic claims a super-fast booting up time of just 0.5 seconds from standby to power on. Users can also watch content from their digital cameras or camcorders using the integrated SD card slot and USB port.

There are two models, the TX-P65VT20B (60in) and and TX-P50VT20B (50in), both with 600Hz Sub-field Drive Intelligent Frame Creation Pro, 1080 lines Moving Picture Resolution and Infinite Black Pro.

The top-of-the-range VT20 series has full Viera Cast networking functionality and has a metallic brown finish.

There are five plasma ranges in Panasonic's 2010 Viera line-up (including the 3D models), and no fewer than eight LCD ranges (three of them with LED backlighting). The full line-up is as follows:

We'll be reporting live tomorrow from the official Panasonic press launch in Munich, so check back here on whathifi.com for UK prices and release dates, and follow us on Twitter for up-to-the-minute news.