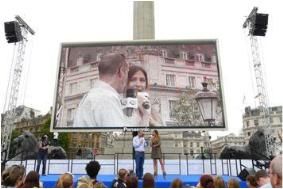 It was part of Panasonic's Olympic Games sponsorship deal, and a chance for the Japanese electronics giant to bring its 3D TV roadshow to the heart of London.

Vaughan and Snowdon were on stage at 11am, beneath a giant 60m sq Panasonic screen, to begin the two-year countdown to London's first Olympics since 1948.

Alongside the stage, Panasonic has its 3D TV booths showing demonstrations of the opening of the Beijing Olympics in 3D.

Other events planned throughout the day include table tennis, women's volleyball and a live link-up with the BBC at 2.15pm when the Beeb will broadcast a live "special news" programme from the Olympic stadium in Stratford, East London.

Panasonic has already run a series of 3D roadshows at other venues across the UK.