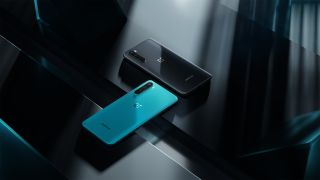 It's been just three months since OnePlus launched its OnePlus 8 and 8 Pro phones, but already the Chinese brand is introducing its next handset. Meet the OnePlus Nord, which has just been unveiled during the world's first AR smartphone launch.

OnePlus' flagship phones have been increasing slightly in price in the past generations, but delivering the premium features to match. Here, however, OnePlus has gone back to its roots and prioritised its flagship-killer reputation. The result: the feature-packed OnePlus Nord, which starts from just £379 (€399).

The OnePlus Nord doesn't skimp on specs, borrowing many from the OnePlus 8, which is almost double the price. For one, the Nord has a quad camera system, comprising the same 48MP main Sony sensor seen on its flagship sibling, an 8MP wide-angle lens (down from the OnePlus 8's 16MP), a 5MP depth snapper and, for shooting as close as 4cm, a 2MP macro camera.

The front selfie cameras are, OnePlus says, the best ever featured in a OnePlus phone, too, with the dual arrangement comprising 32MP main and 8MP ultra-wide lenses.

The OnePlus Nord has an enhanced version of the 90Hz AMOLED screen found in the previous-generation 7 Pro and 7T Pro (compared to the 120Hz screen in the 8 series), in a 6.44in size. Unsurprisingly it's powered by the company's established Oxygen OS, which is based on Android 10. Did we mention that the Nord supports 5G courtesy of Qualcomm's Snapdragon 765 5G processor, too?

Last but not least, the Nord's 4100mAh battery (compared to the 8's 4300mAh juicebox) plays ball with OnePlus' Warp charge 30T technology, which can recharge 70 per cent of the battery in just 30 minutes.