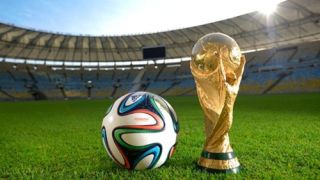 With the big kick-off just one day away, Ofcom has released new research that has suggested the 2014 World Cup in Brazil is going to be the "most mobile yet for UK football fans".

The communications regulator said the rapid growth of smartphone and tablet ownership, plus the increasing availability of 4G connectivity and wi-fi networks, will be behind this shift.

MORE: How to watch the 2014 FIFA World Cup on TV and online

It's thought that 62 per cent of UK adults will keep up to date with the World Cup via their smartphone – compared with just 30 per cent for the 2010 World Cup in South Africa.

Tablets are expected to prove themselves as a major mobile player this summer; 30 per cent of UK adults go online via tablet, whereas the first iPad had only just launched four years ago.

Ofcom has also predicted the timings of the games live from Brazil will increase the focus on mobile usage, with the earliest games kicking off at 5pm – prime commuting time for many.

And the 11pm matches will be taking place at a time when most adults will have headed for bed; an ideal place for smartphones and tablets to stake their claim where TVs may be absent.

In addition to checking scores and social networks for updates, smartphone and tablet users will be able to stream live over 4G connections – a service that hadn't been invented in 2010.

Indeed, 3G mobile connections during the World Cup in South Africa accounted for fewer than four in 10 adults – an indication of how far mobile internet has come in the past four years.

Needless to say, the BBC and ITV – the two broadcasters responsible for screening the World Cup – have made the necessary plans for mobile coverage to cater for this growing trend.

All BBC content will be available on demand through iPlayer – both from TV and radio – while there will also be a "wealth of extensive content" provided online from BBC Sport.

ITV has promised that you can stream all its live matches through ITV Player on itv.com, with the site having been designed especially with mobile and tablet users in mind.

We've been discussing if this will be the World Cup that pushes the case for Ultra HD 4K TV forward, but it may prove a telling tournament when it comes to viewing preferences for mobile over TV.

The 1966 World Cup final between England and West Germany is the most watched TV event in the UK with 32.3 million viewers, according to the British Film Institute.

Compare that with the 15.8 million that tuned in for England's game versus Germany in 2010 (BARB) and it could be suggested that our desire to watch football on TV is now on the wane.

Of course, TVs do retain the upper hand with their larger screen sizes and more stable signals, so it is fair to say that mobile still has much to do – but the scene could be very different in 2018.