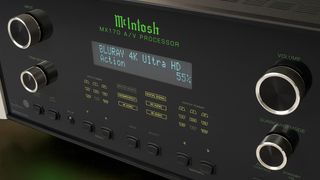 McIntosh has a new pair of serious AV processors and a home cinema amplifier, which are set to make their debut at ISE 2020 this month.

McIntosh has implemented a HDBaseT output, designed to prevent signal loss when the distance between screen and processor is long. And RoomPerfect room-correction technology is onboard to fully calibrate performance to compensate for room acoustics.

Balanced outputs for connections to a power amplifier support a 15.1 surround sound speaker configuration, although if fewer speakers are being used there’s the opportunity to bi-amp speakers.

The MX123’s 13.2 channels are available via both balanced and unbalanced audio outputs, while two additional unbalanced outputs provide additional connection versatility. Its seven HDMI inputs and three HDMI outputs are all future-proofed with HDCP 2.3 compliancy for digital content protection specifications.

The new MC255 (£9995/$8000), meanwhile, is a five-channel home theatre amplifier that features the company’s new TripleView Power Output Meter for identifying each real-time power reading of the three front channels.

Filter capacity has been increased by 50 per cent over the brand’s previous five-channel model, resulting in a much greater dynamic headroom (from 1.7dB to 3.6dB). Power output has increased to 250 watts per channel, too, and when all five channels are used McIntosh’s Dynamic Power Manager technology works to ensure maximum output regardless of whether 4- or 8-Ohm speakers are used.

Many familiar McIntosh technologies have been facilitated here. There’s Power Guard, for one, which is designed to prevent potential speaker damage as a result of clipping and over-driving of the amplifier. Sentry Monitor is another preventive technology, this time against short-circuits. To keep the MC255 cool and quiet, McIntosh has implemented four of its recently announced Monogrammed Heatsinks and a toroidal isolation power transformer, too.