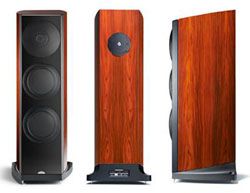 Announced today is the Naim Ovator S-800, the flagship model in the company's speaker range.

It's being unveiled at the Hong Kong High-End Audio Visual Show by Naim MD Paul Stephenson, who will be demonstrating the speaker at the show in its active form, due on sale in December.

The £27,500/pr active version of the speaker requires a separate external crossover, which sits between the preamplifier and separate power amps for each drive unit.

A passive configuration with a crossover built into the speaker's aluminium plinth will follow in January 2013 at £30,000/pr, and buyers will be able to start with the passive version and upgrade to the active set-up later.

The S-800 is described as ' an imposing loudspeaker designed for the owner with a larger than average room and one who appreciates music played with a natural sense of scale and dynamics.'

It stands almost 1.4m tall, and uses the latest version of Naim's Balanced Mode Radiator driver (above), a single 8.2cm driver – mounted in its own isolating cylinder suspended on circular leaf strings at the front and rear – covering a frequency range from 380Hz to over 30kHz and offering wide dispersion across this range.

The driver, the result of five years' development by Naim, does away with the need for a crossover in the middle of the frequency range where hearing is most sensitive, and is underpinned by twin 28cm flat diaphragm bass units (below).

These use a diaphragm made from two 6mm panels sandwiching a honeycomb core, and are capable of a linear excursion of 20mm with low distortion, meaning they 'can deliver

thundering, extraordinarily clean, bass lines if required to do so.'

The entire 93.5kg speaker is decoupled from the floor using leaf springs, and the rigid, inert cabinet is finished in gloss rosewood.

Naim says of the speaker that its dynamic ability isn't all about playing music at high levels: 'it’s more about enjoying the natural sounding dynamic range of good music recordings without feeling the loudspeaker is holding things back.

But the company adds 'Of course if an owner wishes to play Wagner’s Ring at front row of the concert hall levels or ZZ Top at live rock levels, the S-800 will simply sing and deliver every nuance, every note, from the quietest to the loudest, without effort.'