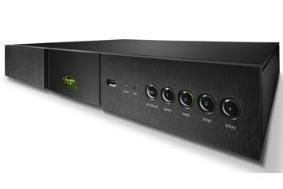 We were down in Salisbury today for the official launch, and can confirm that the £1950 DAC not only has eight digital inputs – four optical, two on BNC connections and a pair of conventional phono inputs – but can also take music digitally from iPods, and control either the Apple players or USB memory devices using its front-panel controls.

Output is via phonos or a DIN socket.

At the heart of the Naim DAC is a system designed to give zero jitter – digital timing errors – from external S/PDIF sources. Rather than try to recover the master clock from the S/PDIF signal – ie the digital inputs – the incoming digital signal is stored in solid-state memory and then clocked back out to the digital-to-analogue converters using a series of fixed-frequency local master clocks.

The audio data is clocked into the memory at the incoming inconsistently-timed rate, and is then clocked out of the memory and into the DAC chips using a precise clock.

The rate at which the memory fills and empties is controlled by selecting the master clock that best matches the average incoming clock frequency. In this way, the data entering the DAC chips is completely isolated from the incoming jitter.

The digital filtering, derived from the company's experience in multichannel DSP gained through its Naim for Bentley project, uses a SHARC processing chip running proprietary Naim software, and provides oversampling of up to 16x on 44.1kHz input signals.

And yes, the company has tested it, and measured the 300+kHz signal coming out of the analogue outputs!

The DAC is also able to take digital signals from any Apple iPod of 5th generation or later, including the iPod Touch and iPhone: it's passed all internal and first stage Apple approvals, and the company expects final approval from Apple in the next few weeks.

That will make it the world's first Apple authenticated high-end DAC.

Connected iPods can be controlled by the Apple remote, the front panel source selectors – which double as track navigation keys with iPods or USB memory devices – or the company's system remote.

In addition, you can switch off iPod charging while you are playing music, as this gives the best sound from the portable players.

The Naim DAC can also be upgraded with the addition of the company's external power supplies – the XPS or 555PS can be used – and the DAC's firmware is fully field-upgradable via the USB ports.