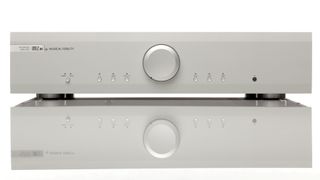 It's interesting times for Musical Fidelity. The brand was acquired by Pro-Ject Audio Systems earlier in the year and we've been waiting to see how the purchase would play out. Well, the wait is now over.

The M2si uses trickle-down technology from Musical Fidelity's flagship Titan power amplifier, boasts 76W per channel and a Class-A preamp stage with its own independent power supply married to a pair of discrete power amps.

The amp is a pure analogue design, so no digital inputs, but it does feature six line inputs.

Both amp and CD player are housed in heavy metal enclosures with aluminium front panels and are available in either a black or silver finish.

And the asking price? Both the M2si and M2sCD cost £799 and go on sale in November.