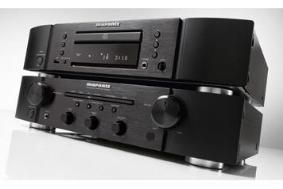 The most obvious difference is the exterior styling, which adopts the M1 front panel and 'reference standard' chassis design to bring the 6003 series in line with the rest of the Marantz range.

Under the lid of the PM6003 lies a lower impedance, case-shielded toroidal transformer, an advanced power transistor capable of handling a higher current than its predecessor and a new extruded aluminium heat sink.

Designed to match the PM6003, both aesthetically and sonically, the CD6003 CD player has the same M1 front panel.

Its CD mechanism will play CD and CD-R/RW discs as well as MP3 and WMA files. There's a USB socket on the front for connecting portable media players, which supports all Apple iPods.

Inside the engineers have added an over-sized power supply to feed the player's digital and analogue circuitry, a CS4398 DAC and Marantz's proprietary HDAM-SA2 amplifier module.

We'll be testing both models in the October issue of What Hi-Fi? Sound and Vision, on sale from August 19th.