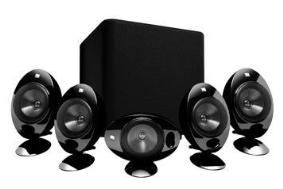 The K2 model has the same centre and satellite speakers, but gets the 200W KUBE-2 subwoofer instead of the 250W HTB2SE.

A third version, the KHT3005SE-W with the wireless HTB2SE-W subwoofer, will go on sale for £1300 from September.

The KUBE-1's sealed cabinet is designed to be space saving, and its onboard 150W amplifier powers a 20cm long-throw bass driver.