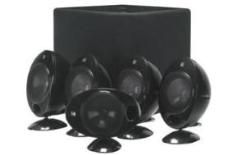 We're led to believe that KEF doesn't like the ‘eggs' nickname for its style speaker systems, but the label has stuck – fortunately so has the style and high quality of KEF's subsequent packages.

This latest offering bears a few subtle changes from its predecessor. Most obvious is the new subwoofer, the Kube 2, which packs a 25cm driver alongside an opposing 25cm passive radiator, together generating a claimed power output of 200W.

Elsewhere, the satellites sport a showy high-gloss finish, and the adjustable satellites are now far more rigid once put in position

As the picture shows, there's a dedicated centre channel alongside four identical speakers. Each speaker has a 10cm Uni-Q driver with a 1.9cm tweeter at its centre, all cased within a cast aluminium enclosure.

Listening to the ear-bashing (in a good way) DTS-HD Master Audio soundtrack of The Incredible Hulk Blu-ray disc, the integration of the satellites is excellent, steering effects seamlessly to create a surround whole that's cohesive and immersive.

Scale is impressive, too, really filling our large testing room with sound.

The KEFs are a very much a smooth listen: dialogue is warm but clear, while top-end treble sounds are handled with much control. As for the sub, it integrates well, providing plenty of punch and power.

The proof of this system's aptitude, however, is its ability with music: whether it's playing Jean-Michel Jarre in surround sound, or belting out Kings of Leon in stereo, it delivers a musical, natural soundstage that majors on both timing and insight.

This KEF KHT2005.3 package isn't the most exciting here, but it is certainly the most accomplished and assured. It's going to take something very special indeed to knock this system off its perch.