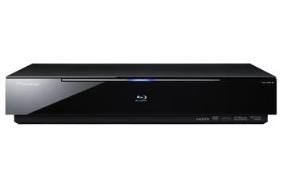 Its first-ever LCD sets, meanwhile, will be made in conjunction with Sharp, and no plasmas smaller than 50" will now be made.

We're finally able to reveal more details about the new TV line-up, new Blu-ray players and range of home cinema systems - all of which have benefited from a serious injection of style...

Both have analogue, digital terrestrial and digital satellite tuners - but disappointingly no FreeSat - an aluminium learning remote, and the connection from the sleek, piano-black media receiver to the monitor is via one cable only. If you don't need to media receiver or its four HDMI inputs, you can purchase the monitors on their own (KRP500M and KRP600M).

Also new to the Kuro line are three Full HD LCD TVs, at 32", 37" and 46", the last not released until later this year. All have combined analogue/digital terrestrial tuners, 100Hz processing, a wide 176 degree viewing angle, room light sensors, three 1.3 HDMIs and a PC input. They're also all a treat to look at, with brushed titanium fascias, slim bezels, hidden buttons and matt stands.

As with the Kuro range, which they reflect, design is a high priority: this is some sleek, black, very good-looking kit. The LX03 and LX03BD, in fact, have motion sensors, lighting up at the approach of a hand, while the LX01BD has a touchscreen LCD remote and a separate display.

The LX03, LX03BD and LX08BD systems are due to hit the shelves in October, while the LX01BD will arrive in November.

Finally, four new Blu-ray players from Pioneer: the BDP51-FD, BDPLX-71, BDPLX-08 and flagship BDPLX-91, which will be BD-Live. All can handle 24 frames-per-second and support DTS HD Master Audio and Dolby TrueHD, while their new user interface reflects reflects that of the Kuro TVs.

The design-led BDPLX-08, pictured, has an aluminium top-plate and ultra-glossy black acrylic front panel, and is likely to be snapped up by design-savvy buyers looking for a standalone player.