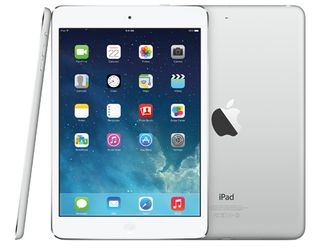 The new Apple iPad Mini with Retina display is now on sale in the UK, with Apple having released the new Mini with little fanfare this morning.

The iTunes Store is reporting that the 16GB and 32GB WiFi only models will ship in 1-3 business days, while the larger 64GB and 128GB WiFi models – and all the WiFi + cellular models are set for despatch in 5-10 days.

Apple's second-generation iPad Mini is available in Space Grey and Silver, with prices starting at £319 for the 16GB WiFi only model. The most expensive iPad Mini 2, the 128GB model with WiFi + 3G/4G will set you back £659.

iPad Mini with Retina display deals are available from 3, EE, O2 and Orange, with a 4G 2GB plan from EE costing £15 per 30 days.

Also new is the inclusion of iOS 7, the new A7 chip and the M7 motion coprocessor, 64-bit architecture and support for 4G LTE mobile data.

Will you be splashing the cash on an iPad Mini with Retina display? Or will you wait and see how it measures up in our compact tablet Supertest in our January issue, out on December 13th? Let us know in the comments below.