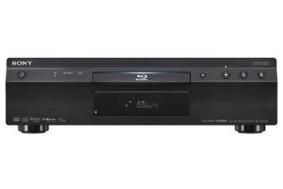 The Blu-ray Disc player is the BDP-S5000ES (pictured), claimed by the company to be 'the world's most advanced', and including features such as an HD Reality Enhancer and Super Bit Mapping designed, it's said to take picture quality 'way beyond what has previously been available from Bu-ray Disc'.

The HD Reality Enhancer is said to give sharper edges without emphasising the grain on the original film, while increasing colour depth from the 8 bits of the original to the equivalent of 14 bits. Meanwhile Super Bit Mapping, which uses processing based on human visual sensitivity, is said to deliver 'the best possible quality over HDMI, with smoother colour tones.'

The player uses a Precision Drive HD transport mechanism in the center position, an ultra-rigid Frame and Beam chassis to reduce vibration and a low-leakage R-Core transformer.The analogue audio board is isolated from the video and servo sections to avoid interference, and the player offers Linear PCM and HD audio decoding with bitstream output, and 7.1-channel analogue outputs.

It will handle all formats up to Dolby TrueHD and DTS- HD Master Audio, either decoded internally or output as bitstream. It will also upscale your existing DVDs to 1080p using Sony's Precision Cinema HD Upscale, and even the analogue component video output is said to be superior, thanks to the use of 14-bit/297 MHz Video D/A conversion.

The SCD-XA5400ES SACD/CD player is designed, Sony says, to provide a perfect transfer of SACD's native DSD data to the matching STR-DA5400ES receiver, using Sony's H.A.T.S., or High-quality digital Audio Transfer System. This allows the AV receiver to control the flow of data from the player, and this, in association with buffering in the AV receiver, ensures the smoothest possible transfer between the two

If the player is used with other amplifiers or AV receivers it employs its own Super Audio CD conversion system, which uses the equivalent of 12 separate digital-to-analogue converters, to output the audio as stereo analogue, either on phono or balanced XLR connectors, or as conventional multi- channel audio via HDMI.

The new 7x130W STR-DA5400ES receiver has six HDMI inputs and two outputs, along with two of Sony's Digital Media Ports for use with portable and computer-stored music.