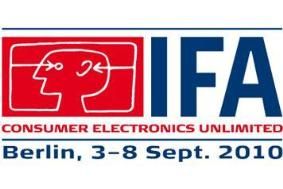 This year marks the 50th Edition of IFA - the show's come a long way since 1924's inaugural Great German Radio and Phonograph Fair, a mere year after the first radio stations began broadcasting in Germany.

When the 2010 show opens on Friday, it will feature more than 1000 exhibitors from 40+ countries, showcasing their wares to an expected quarter of a million visitors from 100+ countries.

IFA is big business - last year's show generated a record-breaking €3 billion worth of orders for consumer electronics products and services - and expectations are already high for some crowd-pleasing launches.

IFA always throws up a few surprises, but here's an overview of what's expected - and when - from a range of CE players. You can find out all the latest news as we do by following our Twitter feed, plus catching up with the full stories - and pictures - here at whathifi.com

3pm (4pm UK time) - Panasonic press conference.
The company is widely rumoured to be expanding its range of 3D plasmas, including the addition of more screen sizes and price options. Will the US models - offering 2D to3D conversion - make it to the UK? We'll find out.

5pm (6pm UK time) - Sony press conference
Sony will unveil its higher-end Blu-ray players - including the BDP-S770, successor to last year's Award-winning 'S760 - and showcase its 3D TV line-up. It's being very quiet about other plans, however - could there be a 3D projector in the pipeline? We'll hunt down the UK team and bring you the answers - as well as asking about the delays in getting the current 3D TV range into shops.

7pm (6pm UK time) - Apple press conference
Beamed from the US, this music-themed Apple launch is widely expected to include a new iPod family - including the Shuffle Touch? - plus a possible music-streaming service to rival Spotify. We'll be reporting live.

11am (12pm UK time) - Samsung press conference
A host of new technology is promised by the Korean company, including an iPad rival and yet more 3D TVs and Blu-ray systems. We'll even get a sneak peek at some 2011 gear

12pm (1pm UK time) - Loewe press conference
The luxury brand has big plans for the UK - we'll find out what they are.

2pm (3pm UK time) - Philips press conference
The official unveiling of Philips' premium range of TVs and Blu-ray players, including the widely predicted launch of its second-generation 21:9 TV. And it's already confirmed the launch of an Android-powered portable. We'll bring you all the details and pics.

4pm (5pm UK time) - Toshiba press conference
Expected to herald the long-awaited European arrival of the CELL TV - the most powerful flatscreen yet, complete with CELL processing technology akin to that of the PlayStation 3. We'll be trying to prise UK pricing from the Tosh team.

5pm (6pm UK time) - LG press conference
As already confirmed by LG, IFA will witness a 31in OLED screen alongside a fresh line-up of LCD and plasma TVs, plus new Blu-ray and home cinema offerings. We'll be looking out for advances in projectors and portables, too.

Friday 3rd September
From Dolby to Sonos, Onkyo to AKG, we've got a host of other launches and events to attend, as well as getting hands-on with all the new products. Expect updates throughout the day.