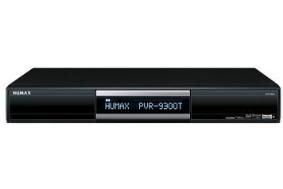 There are two models to replace the outgoing PVR-9200T. The flagship is the £199, 320GB PVR-9300T, said to be able to record up to 200 hours of TV, which has twin Freeview+ tuners, HDMI upscaling, an eight-day electronic programme guide (EPG) and and twin Scart connections.

The cheaper £150 PVR-9150T model has a smaller 160GB hard drive, and twin Freeview tuners like its bigger brother – so viewers can record one programme while watching another.

Both models are also equipped with the following: schedule tracking, so recordings will automatically be adjusted if a programme starts early or finishes late; split recording, for recording two-part programmes (such as a film which has a break in the middle for the news); and alternate instance recording, which alerts the viewer if a clash occurs in their recording schedule and suggests an alternative time if the programme is repeated at a later date.

Series linking allows you to set the unit to record all episodes of your favourite shows, and you can pause and rewind live TV should the need arise.

Humax has thought about its green credentials too, as both models are said to have a power consumption of less than 1w in standby.

Both models go on sale in major high street stores from August 1st.