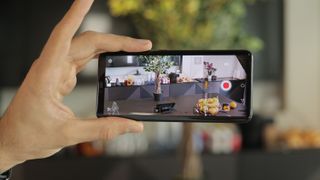 Huawei has launched three new smartphones: the much anticipated Mate 20, Mate 20 Pro and Mate 20 X, the latter of which builds on the Pro variant with a bigger screen and battery.

Joining the stable with the Mate 20 Lite, released earlier this year, Huawei says the new phones are aimed at the new entrepreneur, with each harnessing the power of the company’s highly advanced Kirin 980 chipset.

There’s much to be excited about for those using their phones as entertainment too, however, from the generously proportioned screens – 6.39-inch 2K+ OLED on the Pro, 6.53-inch Full HD on the normal Mate, 7.2-inch Full HD on the X – to download speeds of up to 1.732Gbps over wi-fi and 1.4Gbps while out and about.

Battery is also vastly improved, with the Pro offering up to 70% in 30 minutes via super charge and 58% in the same time for the normal Mate. The X offers the longest life of the three from its 5000mAh battery.

AI predictably remains a focus for Huawei, with its technology bettered and expanded, as is the Mate series’ use as a camera. The Pro in particular houses three – 40MP for wide angle, telephoto and a new 20MP ultra wide angle lens, which, complemented by those AI technologies now with 150 scenes recognised, promise to deliver a near-enough professional standard experience for all scenarios.

In terms of music playback you’ll be relying on wireless headphones, with the new Mates operating on Bluetooth 5.0 with LDAC technology for superior wireless listening.

Whether the new flagship and mid-range Mate 20 phones will be able to compete with Apple’s Award-winning iPhone XS Max as a portable entertainment hub remains to be seen, but we’ll be taking one home to let you know in the near future.