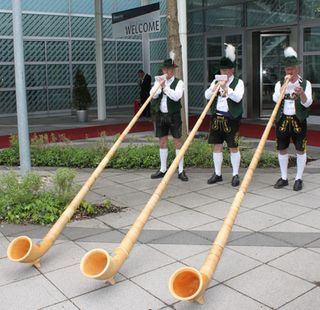 As a voice said, somewhere a few rows back on the 15.05 from Heathrow to Munich last Wednesday, 'It's almost the last real hi-fi show in the world'.

That's quite a billing to live up to, but every year the show organised by Germany's High End Society seems to be able to spring a few surprises, not to mention plenty of opportunities to see – and listen to – equipment you're unlikely to find gathered under any other single roof on the planet.

This being Bavaria, we started the show with a traditional welcome from a trio of alpenhorn players lowing away as if to gather the cattle roaming on the uplands of the A9: if they ever got loose, they'd cause havoc in the huge BMW plant just down the road, not to mention trampling a few Minis.

And so, off round the show, and you'll find many of the highlights of mainstream interest in my coverage for our News channel: the purpose of this blog is to bring you some of the sights – but unfortunately not the sounds – you may have missed elsewhere.

For example, how about the striking Union Flag-bedecked floorstanders (above) from the only-slightly-appropriately-named MAD loudspeaker company?

The company acronym stands for My Audio Design, and this model, the Duke, is a limited edition – as is the Royal Salute Britain Edition (left), complete with a ball-shaped head and curvaceous feminine body wrapped in a more conventional red white and blue flag design.

Apparently, 'The Royal Salute is a labour of love – the work of a team of leading British musicians, psychologists, artists, and electronics and mechanical engineers. She embodies the most advanced loudspeaker technology and the finest components, allied to painstaking craftsmanship.'

Well, in this year of the Jubilympics, I guess it beats buying a tea-towel as a gesture of loyalty and patriotism. It's good, it's all good...

And where do these exotic speakers hail from? MAD's Timothy Jung surprises us with his answer: they're made in Sussex, and the company is headquartered in Croydon, a town I may never again look in quite the same way.

Onwards and upwards – or rather downwards, as the attention is grabbed by the doll-like little speakers from Italian company Audel. They're tiny, made from laminated birchwood, are of a two-way reflex-ported design, and are called Ginger.

Or rather Fred & Ginger, as the little girl here has a partnering boy speaker.

Opposite, on a moody stand carpeted in black deep-pile, are the equally strange, but much taller, V5.12 speakers from Swiss company Sounddelux.

Just the thing for the gentleman with a rocket fetish or a need to compensate, the speakers use opposing drivers firing up and down into a transparent acoustic lens arrangement, through which ever-changing colours play courtesy of LED illumination.

You'll need to be very comfortable in your own skin to contemplate the amazing speakers (above right) from South Korea's Silbatone Acoustics, a company which always puts on a good show in Munich with its valve amplification and truly mad speakers.

Last year it was a huge monolithic stereo speaker, this year it was a pair of speakers charitably described by a fellow exhibitor as looking like 'upturned skips'.

And Guinness-branded black towels in the throat of each horn for damping. But of course...

Hilarious enough already, but then Mr Silbatone says 'How about some rock and roll?', and the opening riff of Led Zep's Whole Lotta Love cannons out of the speakers and we sit there transfixed for the whole track.

Quite simply, it sounded like the cleanest, fastest PA rig in the world – and all with just 8W of amplification on the main speakers!

What else do you need to know about speakers at the show? Well, Neat had a new finish for its super-cute Iota speakers, which are now available in orange,

and fellow Brits Harbeth were playing up their sheer Britishness with a backdrop of the company's speaker set against a scene of village life, complete with pond.

PMC, meanwhile, was playing its twenty range in a room festooned with pictures and testimonials from some of its pro users,

KEF had its history on display to support the launch of its LS50 speakers,

and Ken Ishiwata was demonstrating the new Boston flagship speakers – designed with his partner-in-audio Karl-Heinz Fink – with Extreme Toe-In.

Naim was clearly ignoring the proximity of the massive BMW plant next door, and was going for the Merc crowd with its slogan for the recently-launched NDS, while record-cleaner company Hannl was promoting its range of record cleaners with a new magic feature.

Well, either that or it was exasperated by the sheer number of rival record cleaners on show at the event.

But the best thing about the show is those surprises, such as Antelope Audio's Rubicon.

It's not just a 384kHz-capable DAC, A/D converter, phono stage, preamp and headphone amp in one box, but driven by a Rubidium atomic clock, said to be 100,000 times more accurate than conventional crystal oscillators.

And if that wasn't enough of a shock, there were always the bands of strolling musicians, seemingly appearing from nowhere and striking up when you're least expecting a blast of guitar, brass and accordion.

Too much too see, and too little time – two days wasn't enough, so we're going for three next year...