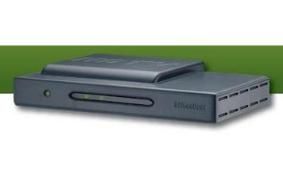 The unit, which is now available for an introductory price of £159 from the pcTVok website, has been available in the US for a couple of years, but is now making its debut over here in a version re-engineered for UK use.

And that means not only Freeview capability, but the ability to receive and stream HD broadcasts when they become available on the terrestrial platform.

Its twin tuners connect to a TV aerial, and the output is via a standard Ethernet port into a router, either wired or wireless. That done, the unit can be accessed by any computer on the network running video player/recorder software, and the programmes viewed or recorded on the PC.

HDHomeRun is compatible with Windows Media Centre from MCE 2005 right up to the latest Windows 7 version, and also with the VLC multiplatform media viewer, and MediaPortal and GB-PVR Windows digital video recorders.

Under development is compatibility with EyeTv for Mac, Myth TV for Linux, and Sage TV for Windows, Linux and Mac.

Multiple units can be combined to feed more complex networks, and the system is completely expandable.