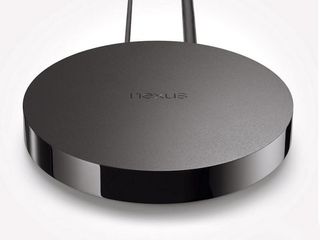 The Nexus Player will be the first Android TV set-top box, providing access to Google's Play store of apps, movies, games and music. It differs from the other player that's also in the pipeline, the Nvidia Shield, in that the Shield is first a foremost a games console, rather than a set-top box. The Shield does have 4K playback capabilities, though.

The box is powered by a 1.8GHz quad-core Intel Atom processor with 1GB of RAM and 8GB of onboard storage. It's controlled via a supplied remote control, which can also understand voice commands, in a similar fashion to the Amazon Fire TV.

The US version also has a separate games controller available, but it's as yet unclear if this will be coming to the UK as well.

The Google Nexus Player should be available on Amazon this Thursday [26th March] and via the Google Play store.

The release follows the launch of Amazon's Fire TV stick in the UK earlier today, and a price drop for the Apple TV set-top box, which is now £59.

Apple is expected to launch a new Apple TV box in June this year, potentially alongside a Netflix-rivalling streaming video service.