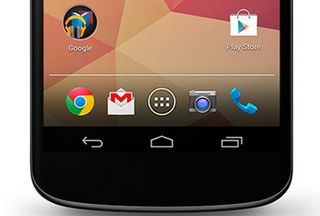 Some freshly leaked images and a video have emereged that give us the best idea yet of what to expect from the upcoming Google Nexus 5 flagship handset.

The video, a 7-minute clip that first appeared on the Android Police website, shows off several features of the new Nexus phone that confirm recent rumours.

For starters it certainly is a handful, and although no official dimensions are given, it looks as though the phone is sporting the 4.95in screen as expected.

A rubberised backing and a minimal bezel are also on show, taking design inspirations from both the recently released Nexus 7 and LG G2.

A large camera and flash can be found on the back, with a central, forward-facing one on the front.

It's clearly a prototype model – there's no 'Nexus' branding on the back cover – but nevertheless appears to give us a good glimpse of the next Google phone.

The images show a transparent notification bar and the ability to access the camera directly from the lock screen. Redesigned launcher and phone icons are on display, as well as smaller app drawer dimensions; 5x4 compared to 5x5 on previous versions of the OS.

Delving further in to Android 4.4, its clear that Google want to try and further push the company's Google+ social network, with the messaging and gallery apps being given the boot. In their place are 'Hangouts' and 'Google Photos', both of which link to Google+.

Widgets have also departed from the app drawer, instead now being accessible once again via a long-press on the homescreen, which is in someways a step back for Google, going back to pre-Ice Cream Sandwich OS days.

Google Now has been given better integration, accessible by swiping left from the far left home screen panel. It will also always be listening to the owner as well, responding to 'OK Google', in a similar way to Google Glass or indeed Apple's Siri (you can't say Google to that, mind).

The images are likely to be a truer representation of what to expect from Android 4.4 KitKat, with a refreshed UI being offered rather than a complete design overhaul. The video however gives us an almost certain idea as to the hardware design of the handset.

All we can do is wait until the official Nexus launch, watch this space...