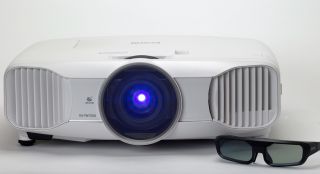 We spoke to Neil Colquhoun, the business director of Epson Europe’s Visual Instruments division, to find out more. Earlier this year, Epson launched the £6000 EH-LS10000, its flagship home cinema projector and the company’s first to use a laser light source instead of the typical lamp.

And according to Colquhoun, it won’t be the last: “The future of Epson’s home cinema projection definitely includes more laser, more resolution”. He didn’t rule out more aggressive pricing in future models, while also hinting laser models would soon appear in Epson's custom installation product range.

We were itching to hear about Epson’s 4K plans, with the existing EH-LS10000 only ‘psuedo-4K’. (Rather than having a full 3840 x 2160 panel like its Sony rival, it uses ‘enhancement’ technology, which claims to achieve perceived-4K resolution by shifting each pixel diagonally by 0.5 pixels.)

It turns out while native 4K is certainly on Epson’s radar, the brand believed that it was more crucial that the EH-LS10000 could simply play 4K material – which, of course, it can.

“We could have waited to do it in full 4K [but] we believe that the 4K upscaling – the pseudo-4K – is more than acceptable for consumers,” said Colquhoun. "Futureproofing comes at a cost… I would contend that the average customer wants a very good Full HD projector that can do 4K."

As for HDR (High Dynamic Range) support, we wouldn’t hold your breath on that arriving on an Epson projector anytime soon, though we're awaiting any official confirmation. At the moment, only Sony supports HDR in its high-end VW520ES, while JVC will soon launch next-gen models with HDR.

Right now, the core focus for the Japanese company’s projector division is competing in two of the industry’s biggest developing markets: those with a high brightness of 3000 lumens and above, and projectors that fall into the popular £600-800 price bracket.

Most of Epson's home cinema projector range comes in between 2000-2400 lumens, including the EH-TW7200 that took home our Product of the Year 2015 Award. A high lumen output is more typically associated with business projectors for use in brighter rooms, but Colquhoun says it's crossing into over 50% of the home cinema projector market. BenQ and Acer already have a few 3000 lumen+ models under their belt.

“The average customer wants bright, colourful and vivid images so the biggest thing for us over the next twelve to eighteen months is winning back that share of business in the above 3000 lumens market,” said Colquhoun.

Epson has already started that campaign with the recent launch of its first 3000-lumen home cinema projector, the EB-U04 (on sale for around £550-600), which we’ll be taking a look at soon. Watch this space.