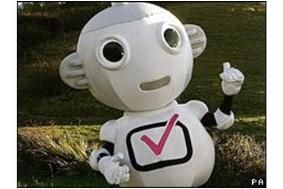 Around 18 million households (89.2 per cent) have a digital TV receiver, either built into their TV or as a separate box.

Video recorders with built-in digital tuners are also proving popular, says Ofcom, with one million being sold in the first quarter of 2009.

Of all the digital video recorders in people's homes, five million are Sky+ boxes, 2.6 million are Freeview recorders and the remaining 1.2 million are split between Virgin Media's V+ box, BT Vision and Top-Up TV.

The Ofcom report also showed a drop of 28 per cent in the sales of Freeview set-top boxes, as TVs with a built-in Freeview tuner start to take over from standalone devices. Sales of TVs with integrated digital tuners have now hit 20 million.

As for secondary sets in bedrooms, kitchens etc, Ofcom reckons 61 per cent of these are capable of receiving digital TV. The industry regulator thinks about 27 per cent of TV sets used in the UK can still only receive analogue signals.

The Government is committed to completing the switchover to digital TV across the UK by 2012. Analogue signals have already been turned off in the West Country, Scottish Borders and the Isle of Man.