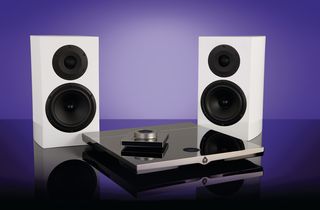 Ensemble is being described as a "ready-made audio solution" that actually pairs the Devialet 120 with a pair of special edition GT1 speakers and a set of 3.5m speaker cables from another French company, Atohm.

The GT1 speakers have been made specifically for Devialet, with the entire Ensemble system designed to offer a "fabulous musical experience from any source" – including digital, wireless or analogue sources.

Devialet says a "number of breakthrough technologies" have been brought together in its new system, with Analogue Digital Hybrid (ADH) amplification at the heart of the Devialet 120 amp among the innovations.

ADH has been combined with a new proprietary technology called Speaker Active Matching – SAM – that match Devialet components with specific speakers with the help of "sophisticated digital processing".

The 120 offers maximum power of 120W per channel, a digital-to-analogue converter that can handle high-resolution audio up to 24-bit/192kHz, a configurable phono stage and a full quota of inputs and outputs.

Inputs include a network input for universal streamer Devialet AIR; four digital coaxial inputs; an analogue input; two optical inputs; and an asynchronous USB input that is fully compatible with Macs and PCs.

Devialet Ensemble has been designed and built in France, but has now arrived in the UK and is available through Absolute Sounds for £6290. If you don't want the full package, the Devialet 120 costs £4490.