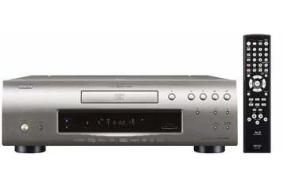 Denon claims the DVD-300BD is the world's first Blu-ray player to feature the acclaimed 10-bit Silicon Optix Realta chipset. This is said to provide "the highest resolution high-definition video available today via HDMI".

Video performance is claimed to be even further enhanced by the unit's HQV video processing, while Denon's Pixel Image Correction and Digital Noise Reduction features help the player to remove unwanted artefacts from any films being watched.

Add in a 12-bit/297MHz video DAC and the result is apparently "an astoundingly clear and crisp Blu-ray image."

Realta scaler upscales DVDs to 1080p
That's not all. Denon hasn't forgotten that lots of us still have big DVD collections. So the DVD-3800BD uses an interlaced/progressive converter and a Realta scaler that upscales the standard-definition video images of DVD to high-definition 1080p.

Equal attention has been paid to the audio side of the equation. The new player incorporates a newly-developed and snappily-named Dynamic Discrete Surround Circuit - High Definition (DDSC-HD) to support all the latest HD audio formats.

This topology uses discrete devices for superior performance in each circuit block and Dolby TrueHD and DTS-HD Master Audio decoders.

Denon has also developed a bespoke drive mechanism for use with Blu-ray discs. To protect the internal disc space from magnetic influences, dust and external noise, it added a shield to the top and bottom of the unit.

However, like Denon's other Blu-ray models, the DVD-3800BD is Profile 1.1 out of the box, not Profile 2.0. A firmware upgrade will be available via disc.

The Denon DVD-3800BD will be available from December in silver, premium silver and black. The cheaper DVD-1800BD model is also expected in-store from December at a retail price of £600.