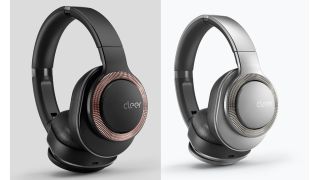 The San Diego-based new kid on the audio block is entering the UK market with the introduction of its Flow noise-cancelling Bluetooth headphones.

You could well argue the UK doesn’t need a newcomer in this rife, Sony-, Bose- and Sennheiser-dominated premium segment – and you’d have a point – but it’s got one anyway. And, actually, we're rather intrigued.

Behind the Flow’s design is Cleer’s own, patented hybrid noise-cancelling technology, which claims to block out “almost 99.5%” of environment noise with the combined efforts of an ANC chip and dual microphones, and the isolation naturally provided by the earpads.

How will it fare against Sony and Bose’s eerily effective noise isolation, we wonder? Well, we’re told Cleer’s engineers are mostly ex-Sony, so we’d reasonably expect (or at least hope) the Flows to share a similar pedigree.

The “performance audio brand” will also need to compete on the sonic side, of course. To that end, Cleer has utilised patented 40mm Ironless drivers, which uses a stack of magnets as opposed to the more typical arrangement of soft iron parts and a single magnet, in an effort to reduce transducer motor distortion.

The activation of an Ambient Noise mode by pressing an on-cup button allows the wearer to hear ambient sounds – handy for, say, quickly listening to train announcements – while an auto-pause feature pauses music when the headphones are taken off.

The Cleer Flows claim 20 hours of wireless ANC playback from a single charge, and as you'd expect support hands-free calling.

Available in silver or black, the Cleer Flows come with interchangeable rings for a choose-your-own aesthetic, and can fold for a snug fit within the supplied carry case. Having launched in the US last year, they go on sale in the UK this month in Harrods and Selfridges, priced £249.