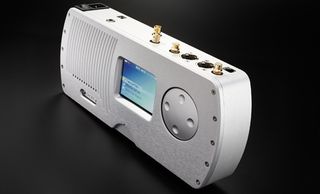 Chord has officially launched the CodeX, "the world's most advanced uPnP network music player", with a price tag of £4495.

The most recent addition to the Choral streaming range, the Chord CodeX supports DSD 128 playback and 384kHz PCM decoding over USB, and sports a high-end proprietary DAC.

The CodeX is one of the very first streaming products to support both DSD 128 playback and PCM decoding up to 384kHz over USB.

USB and coaxial inputs do the digital donkey work, feeing the same DAC as found in the QuteHD. As well as Chord's latest-generation Pulse Array DAC, which re-clocks all incoming data to minimise jitter, the CodeX benefits from an enhanced power supply and circuit layout.

In terms of control, a remote is supplied or you can use Chord Electronics' own iOS app. Go back to basics and use the controls on the the unit itself and you'll see Chord's own remote motor-controlled analogue volume adjustment, as seen on the £25k CPA8000 preamp.

Constructed from aircraft-grade aluminium, the Chord CodeX is hand-built to order at Chord Electronics' factory in Kent, UK. Dedicated stands and supports are also available in a range of sizes.

Available in silver or black as standard – special finishes are available – the Chord CodeX will be available in August for £4495.