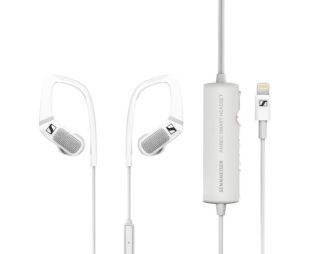 At CES 2018, Sennheiser is unveiling a prototype of the latest project under its Ambeo 3D audio umbrella: a soundbar.

Like DTS:X Virtual (featured in the Yamaha YAS-207 soundbar), Ambeo aims to create three-dimensional sound (binaural audio) to make whatever you're listening to much more immersive.

We’ve been impressed by the technology in multiple-speaker demos in the past, but how successful its implementation in a soundbar is remains to be heard. After all, our experience of Dolby Atmos soundbars hasn’t been all too encouraging – even if the Atmos-supporting Sony HT-ST5000 took home a 2017 What Hi-Fi? Award.

Hopefully the wait won't be too long.

Sennheiser released its first commercially available Ambeo product – the Ambeo Smart Headset (pictured top) – last spring, and while the soundbar shown off here at CES is only a prototype, it’s good to hear that more products are on the audio brand’s Ambeo roadmap.

The HD 820 (above) look to be familiar Sennheiser fare, and feature curved Gorilla glass covers over its ring radiator transducers designed to minimise resonance by reflecting sound from the rear of the transducer to two absorber chambers.

Pricing is yet to be confirmed but the HD 820 should be available from early summer 2018.

As for the CX 6.00BTs, they boast aptX Bluetooth, and can pair with up to two devices simultaneously. The six-hour battery life can be fully charged in 1.5 hours, although fast charging can provide two hours of music playback in ten minutes.