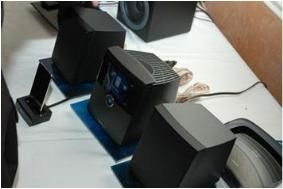 Unlike Homeserver, it's got a really easy to use web interface and actively seeks out tunes and movies on any networked device and backs them up or accesses them automatically.

The emphasis is on simplicity of use: you won't know, apparently, if the track you're listening to is stored on an iPod, PC or hard drive, because you don't need to, and set-up screens are as straightforward as possible.

Also unlike Homeserver, it's relatively cheap. It's on sale in the US for $299 already.

Wireless home audio for $299
The second big announcement is even better, though. The Wireless Home Audio (above) may not be as attractively named as its Sonos streaming rival, but it is available from $299 from today.

Like the Sonos, it can stream several feeds around the house, and uses music stored on any networked device. It also has an optional iPod dock.

The key difference, though, is that almalgamates all tunes into one virtual library, so finding music is very easy. Because all feeds are IP based, it can also stream over the net to your phone, for example.

Best of all, though, is the fact that it is completely unrestricted by DRM. While insididious copy protection is on its way out, the WHA can stream music locked to a particular device – like an iPod – without restriction.

It's based around a 4.3inch touchscreen remote, and a small server unit. Extras include a remote amp and, later in the year, a stereo micro system.

Look out for a full review soon where we'll find out if the playback quality can match up to the potential of this kit.