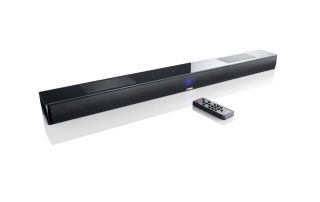 Last month we brought you news of Canton's Smart Soundbar 9. Now, the German audio brand has one-upped that model with a brand new flagship: the Smart Soundbar 10.

Both models support multi-room connectivity and music streaming over wi-fi and Bluetooth, but the Soundbar 10 adds the all-important support for Dolby Atmos, as well as a touch-sensitive control panel.

The Soundbar 10 is also 10cm wider and boasts a new speaker array that drops the passive drivers found in its smaller sibling.

Despite the 'smart' branding, neither model supports voice control. On the upside, they do have Google Chromecast for streaming from the likes of Spotify, Tidal, Google Play Music, Deezer and TuneIn. High-res audio is supported – up to 24-bit/96kHz over wi-fi, and 24-bit/192kHz over HDMI.

Both soundbars can be wirelessly connected to other products in Canton's Smart family, too, including the Canton Smart SUB 8 subwoofer and Smart Soundbox 3 speakers. If you wish, you can build your 'bar into a true surround sound or a multi-room music system.

Of course, not everything you watch has an Atmos soundtrack so it's not suprising that there's also decoding for Dolby Digital and DTS Digital Surround formats (including DTS TruSurround).

Physical connections to connect the Smart Soundbar 10 to your TV take the form of four HDMI sockets with 4K video passthrough, optical, coaxial and RCA inputs, plus a subwoofer output enabling the wired hook-up of an external subwoofer.