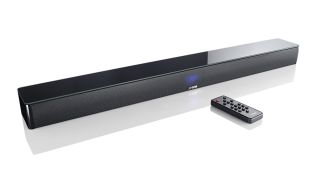 Canton has won many a What Hi-Fi? Award for its soundbases over the years – most recently for its DM55 – so the German brand's brand-new line of Smart soundbars has us thoroughly intrigued. The new models aren’t 'smart' in the contemporary sense in that they don't have voice control, but they do build on their predecessors' TV speaker duties with network features.

The first model up for scrutiny is the Smart Soundbar 9, a wi-fi-enabled 2.1 soundbar that features Google Chromecast for direct streaming from the likes of Spotify, Tidal, Google Play Music, Deezer and TuneIn.

It can use its network talents to wirelessly connect to the separately-sold siblings in the Canton Smart family, such as the Canton Smart SUB 8 subwoofer and Smart Soundbox 3 surround speakers, to build a more mature AV set-up or create a multi-room environment.

For offline music streaming, there’s aptX Bluetooth onboard. Physical connections to connect the Smart Soundbar 9 to your telly include four HDMI sockets – three inputs and one ARC output, all HDCP 2.2-compliant for 4K video passthrough – and optical, coaxial and RCA inputs. A subwoofer output allows for the wired hook-up of a subwoofer, too.

There’s decoding for Dolby Digital and DTS Digital Surround formats (including DTS TruSurround) as well as hi-res support up to 24-bit/96kHz. Sound features include three equaliser presets, Lipsync technology and IR-learning to control the soundbar with another remote.

Priced £699, the Canton Smart Soundbar 9 will be available in the UK from late July in a choice of black or silver.