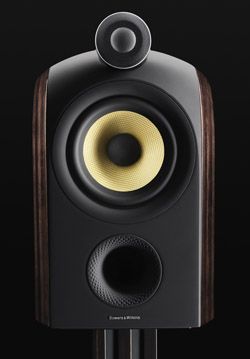 We got an inkling B&W was up to something a few weeks ago when an eagle-eyed poster on our Forums spotted top-secret info about a new B&W mini monitor on the web.

Before long, B&W's PR machine swept into action and had the offending material removed.

Now we can officially reveal that the speaker in question is the new PM1, fitting in between the CM series and flagship 800 Diamond range at £1995 a pair.

B&W is at pains to point out this is purely a stereo model designed exclusively for music and – for now at least – there will only be a single standmounter. So definitely no centre, rears or subwoofer for home cinema use.

"There's no market for a fourth, full B&W range," says product manager Mike Gough, although we got the impression their might be the possibility of a stereo floorstander in the future if the demand is there.

So why did B&W decide to develop a small speaker? "We didn't want to have a large range of products catering for home theatre as well as two-channel audio," explains Gough.

"We decided we wanted a loudspeaker that specialised in stereo and concentrated our effort into producing an exquisite small speaker. Small moniitors image very sweetly. This isn't a replacement for the 700 series, think of it more as a smaller 805S."

A huge amount of development work has gone into the new model, which was created in conjunction with design firm Native, which also worked on the Zeppelin, Zeppelin Mini and P5 headphones.

For starters, the PM1 has a carbon-braced tweeter (see above) – its aluminium dome is stiffened with a ring of filament-wound, pitch-based carbon fibre. This raises the break-up frequency of the tweeter to 40KHz.

The tweeter mechanism itself is mounted on top of the cabinet, as on the 800 Series Diamond, and uses a Nautilus tapering tube.

Sitting below the tweeter is a familiar Kevlar cone bass/midrange driver as used on the CM1. However, this one has a new anti-resonance plug: a mushroom-shaped device made from rigid EVA that fits tightly inside the voice coil former, helping to dampen resonances in the cone.

As for the cabinet, it uses B&W's Matrix bracing system for improved rigidity. The front baffle and curved top panel is made from a thermoset plastic composite with an extra layer of mineral-filled resin on the back for additional mass and damping.

The crossover is kept as simple as possible, to maintain the purity of the signal, and uses Mundorf M-Cap Supreme capacitors. Oxygen-free copper speaker terminals are fitted on the back of the cabinet.

Initially the B&W PM1 – £1995 per pair – will be available in a Mocha Gloss finish, with a Burgundy version to follow [EDIT - B&W has since stated this second finish is no longer scheduled]. The optional PM1 stands are £400 extra.

Expect to see the PM1 in a B&W dealer near you this July. We'll have a full test in our Temptation section in the coming months.

In the meantime, here are the raw tech specs for you to chew on.