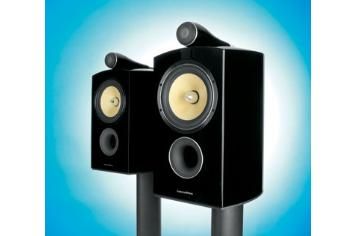 The babies of the 800 range are great, but they’re easier to admire than love

We've always liked the 805s, and this entry-point into B&W's high-end 800 series has always seemed like great value. It was made to the same standards as the company's £15,500 800D, yet only cost around an eighth as much.

This latest version, the 805 Diamond, is arguably the most radically altered generation in the model's history – but you'd never know from just looking at it.

The 800 range cabinets used to be made in Denmark, but B&W has moved all the machines to the UK. We've visited the factory in Worthing and can testify to the extraordinary amount of work that goes into making these complex curved enclosures.

The cabinet remains the same
New range of finishes apart, the cabinet is much the same as before. It remains heavily braced for strength and resonance reduction, and is is an immensely rigid and weighty structure. Take care if you lift an 805 Diamond – it's heavier than you'd expect at 12kg.

Bolted onto the front is a familiar-looking 16.5-cm Kevlar mid/bass driver. Don't be fooled, much has changed. The chassis is new, and there have been modifications to its internal workings and overall bass alignment.

But that's not the big news. It's the adoption of a diamond-dome tweeter that grabs the headlines. Why diamond? Well, apart from making the marketing department's job easier, it's very rigid.

In numbers it means the first ‘breakup mode' – the point where the dome stops behaving itself – is 70kHz rather than the 30kHz of one of B&W's conventional metal domes. Such a high breakup point pushes any problems further away from human hearing limits (about 20kHz), and should result in a cleaner sound.

Rather than just taking the Diamond tweeter from the last range and placing it on top of an 805, the engineers have developed it further by changing the surround and motor system.

The devil's in the detail
It's fair to say all the detailed work on the drive units, cabinet and first-order crossover has paid off.

Positioned in free space, these speakers deliver an exceptionally well-developed stereo image. When it comes to image precision or the sense of speakers disappearing into a sound stage, few rivals do it better.

That diamond tweeter? It's lovely: supremely detailed and fast with it, while retaining an enchanting sweetness.

Don't get us wrong. If a treble sound needs bite or aggression these speakers will oblige, and they'll reveal every last high-frequency flaw in a less than refined recording such as Eminem's Not Afraid. But nothing is emphasised; you just get exceptionally clean highs with none of the bad bits.

One piece of advice, though: take off the tweeter grilles for critical listening. It improves transparency no end if you do.

Oh, and don't forget to cover them up again once the listening session is done – the tweeter is fragile and a replacement costs about a grand.

Incredibly detailed presentation
Move down the frequency range and it's mostly good news. The midrange is smooth and full-bodied. It's great with vocal-based material such as Antony and the Johnsons' Swanlight, where the speakers get a chance to show off their subtlety and organic handling of low-level dynamic nuances.

The bass-end is surprisingly weighty and nicely integrated, though a little thick sounding with it. We wouldn't make too much of this, as it's not enough to spoil the good work done elsewhere.

What it does do is emphasise the 805s' slightly soft-centred approach to music replay. This is an undeniably sophisticated sounding speaker.

It's as refined as they come and digs up more low-level detail than most as this price level. Yet, when it comes to conveying the attack in a piece of music, or its rhythmic drive, these B&Ws don't like to move up a gear. They prefer to stand on the sidelines doing a two-step shuffle rather than get down and party.

Pump up the volume
The issue is worst at low levels, where the speakers can sound a little lifeless. Pump up the volume and they gain punch and snap, but still not quite enough to satisfy us.

It seems that somewhere in the 805's magnificently rich technology mix, the idea that speakers should enthral and delight has been sacrificed at the altar of information retrieval.

As capable and impressive as the 805 Diamonds have turned out, we can't help but feel just that little bit let down.