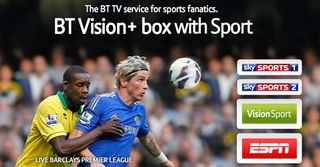 BT has today announced the acquisition of the EPSN UK and Ireland TV channels business, which include the ESPN and ESPN America channels and live sports rights.

The deal is expected to be completed on July 31st and will bring live FA Cup, Scottish Premier League, German Bundesliga and UEFA Europa League football to the new BT Sport TV service, which will launch this summer in time for next season.

BT has already purchased Premier League football coverage for its new TV service, with a package that includes 38 live games a season. This also begins next season and will run for three years.

BT is proposing to keep at least one branded ESPN channel running, while the rest of the content will be reallocated to the new BT sports channels. The ESPN Classic channel, which isn't part of the deal, is set to be wound down by ESPN.

No specific word on the popular free ESPN Goals app, though, which currently shows free Premier League highlights on mobiles and tablets.

As we reported last year, BT is rumoured to be planning three sports channels and pay-per-view offerings for Premier League football on its new BT Sport TV service, having secured Jake Humphrey from the BBC to front the flagship football coverage on BBC Sport.

The deal will mean BT Sport customers can see 38 live Barclays Premier League matches, including 18 of the 'top clashes', in each of the next three seasons. The deal begins in August 2013 for the 13/14 season.

There will also be 69 live Aviva Premiership Rugby matches over the next four seasons and up to 800 hours per season of live women's tennis. BT is also promising "the best of US sports".

It's the latest move from the BT Group, which is seeking to transform its existing BT Vision TV package in to a genuine rival to the Sky and Virgin Media TV platforms.

The new BT Sport TV package is due to be launched by BT this summer.