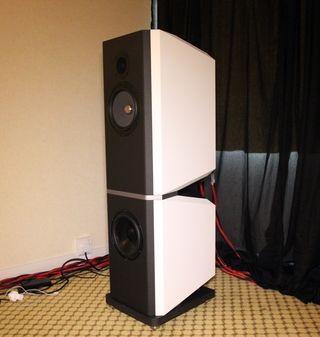 It's thought that the Titan 808 will cost in the region of £20-25,000, with this mammoth addition to the Kudos range of speakers incorporating a number of custom-designed components.

The Titan 808 is currently in prototype mode and only takes one cue from its predecessor with its two isobaric bass drivers remaining identical to those found in the original Titan 88 speaker.

MORE: Read all our Kudos Audio reviews and news

Kudos has confirmed that the mid-bass driver, tweeter and crossover have all benefited from a series of refinements, while there's an all-new and "even more complex" cabinet design too.

In addition to the Titan 808, the Super 10 stand-mount and Super 20 floorstander are also new speakers from Kudos – and all three speakers come with support for Linn's Exakt technology.

Kudos has been working with Linn to develop Exakt support for the three speakers, which aims to deliver a "wide range of performance- and personalisation-enhancing capabilities".

In terms of the Super 10, it has the same 12-litre cabinets as the C10 – the current stand-mount reference at Kudos. And the drive units have been produced by Norwegian company SEAS.

The main driver includes a copper shorting ring; an aluminium phase plug to act as a heat sink; and a hand-treated paper cone. Chord Company wiring, meanwhile, can also be found inside.

Priced at £3495, the Super 10 also incorporates Mundorf inductors and Mcap Supreme Silver/Gold/Oil capacitors in the minimal crossover, which has been designed to reduce phase errors.

Its £4250 sibling – the Super 20 – combines the Kudos Crescendo K2 tweeter from the Titan 88 with a brand-new main driver that, like the Super 10's, makes use of a copper shorting ring.

The cabinet has been built using 18mm high-density MDF, which the company claims is chosen for its "acoustic properties". Real wood veneer or satin white paint finishes are available.

Elsewhere, the reflex port is located on the bottom of the cabinet to help increase the number of placement options open to you and the plinth has a fixed boundary gap for extra stability.